If you love seeking out surreal sites, that look not of this world, then do we have a destination for you. “Pamukkale”, meaning “cotton castle” in Turkish, is a natural site in Denizli Province in south western Turkey. It is an unreal little village that has some of the most spectacular turquoise water terraces you will ever lay eyes on. There are 17 of them in all that range in temperature from 35 °C to 100 °C.

What makes this site so breathtaking, however, is how the pools look against the white limestone mountains. The terraces are made of travertine, a form of limestone deposited by the thermal waters. It is located in Turkey’s Inner Aegean region, in the River “Menderes” valley, which has a temperate climate for most of the year.

The ancient Greco-Roman and Byzantine city of Hierapolis was built on top of the white “castle” which is in total about 2,700 metres long, 600m wide and 160m high. It can be seen from the hills on the opposite side of the valley in the town of Denizli, 20 km away.

Pamukkale is Turkey’s foremost mineral-bath spa because of its natural beauty: hot calcium-laden waters spring from the earth and cascade over a cliff. As they cool they form dramatic travertine’s of hard, brilliantly white calcium that form pools. Named the “Cotton Fortress” in Turkish, it has been a spa since the Romans built the spa city of Hierapolis around a sacred warm-water spring. The Antique Pool is still there, littered with marble columns from the Roman Temple of Apollo. You can swim in it for a fee.

Tourism is and has been a major industry. People have bathed in its pools for thousands of years. As recently as the mid-20th century, hotels were built over the ruins of Hierapolis, causing considerable damage. An approach road was built from the valley over the terraces, and motor bikes were allowed to go up and down the slopes. When the area was declared a World Heritage Site, the hotels were demolished and the road removed and replaced with artificial pools. Wearing shoes in the water is prohibited to protect the deposits.

Pamukkale Hot Springs can be visited all year long, but it is absolutely spectacular in the winter time, when natural pools of hot water form and tourists can take long, soothing baths.

You can reach Pamukkale by car, bus, train or airplane. It makes a great overnight stop as you travel between İzmir, Selçuk, Ephesus, Kuşadası or Marmaris and Antalya or Konyaand Cappadocia. t’s possible to visit Pamukkale on a day-trip excursion by train from Selçuk (Ephesus) or İzmir.

You can spend a pleasant day at Pamukkale, exploring the extensive Roman ruins of Hierapolis, climbing the ranks of seats in the great Roman theatre, touring the exhibits in the Archaeological Museum, splashing along the travertine’s (where permitted) and even soaking in the Antique Pool littered with fluted marble columns.

Coming from, or going to the Aegean coast, you may be able to combine a visit to Pamukkale and Laodicea with a visit to “Aphrodisias”, the ancient City of Aphrodite, goddess of love.

PLACES TO VISIT AT PAMUKKALE:

***”Laodicea”– Located one km west of the road between Denizli and Pamukkale, you can make a short side-trip to visit this ancient city. It is an extremely old city that is being “born again” through archaeological restoration.

***”Pamukkale Town”– At the foot of the travertine’s, the little town of Pamukkale has numerous small hotels, houses, restaurants, and such services as shops and bus ticket offices. Many houses have their own small warm mineral water pools.

***”Karahayıt”– the village north of Pamukkale, was once known for its rust-red hot mineral waters, filled with iron and calcium. In the 1990’s, when the motels atop the Pamukkale plateau were razed, Karahayıt became the place selected for development of large luxury spa hotels like the “Richmond” and “Colossae”.

***”The Plateau”– The travertine’s form a plateau atop which is the Sacred Pool, the ruins of Hierapolis, and the Archaeological Museum. These are what you want to see. There are three entrances to the plateau. You’ll pay a fee to enter at any one.

As you enter Pamukkale Town in a car, local men on motor scooters will race after you, catch you, and gesture to you to stop your car. When you do, thinking there is perhaps something wrong with your vehicle, or a dangerous situation ahead, you will discover that they only want to sell you something. They will ask if you need a hotel, restaurant, souvenir, carpet, etc.

Pamukkale is generally to be seen but not touched. In many ways, that’s to be applauded. The site is a truly remarkable natural phenomenon and it would be a pity if human interference damaged it permanently for future generations. 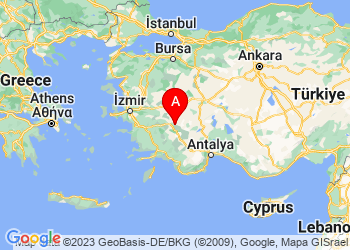