“Guilin” is a city in the north-east of Guangxi Zhuang Autonomous Region, in southern China, known for its dramatic landscape of limestone karst. At its centre are 2 lakes, Cedar and Banyan, remaining from a Tang Dynasty moat that once surrounded the city. Boat tours travel through these and other lakes via connected rivers. On Cedar Lake’s shore, twin pagodas, the Sun and Moon, light up the sky at night. The strangely shaped hills or karsts, with the verdant vegetation ranging from bamboos to conifers together with crystal clear waters and wonderful caves make the city such an appealing destination. It is also an important cultural city. There are many attractions in Guilin which will make you fascinated.

-“Lujia” Village is located at the banks of Peach Blossom River, on the way to the Reed Flute Cave. The village was renovated according to the prototype of North-Guangxi-Style folk houses. It is a good place to see the North-Guangxi-Style architectures and experience the local rural life.

-“Reed Flute Cave” is located five kilometres north-west of the down-town of Guilin. It is a fascinating gallery of natural sculptures, now enhanced by multicoloured lighting, which has been one of Guilin’s many interesting attractions for over 1,200 years. It rates as one of the top four tourist sites in the city. The cave got its name from a type of reed growing outside, which can be made into melodious flutes. The cave is filled with a large number of stalactites, stalagmites, and rock formations in weird and wonderful shapes. Illuminated by the coloured lights, the cave looks like a dazzling underground palace. That’s why the cave is also known as ”Nature’s Art Palace”.

The most liked formations are “Rose Dawn” over “Lion Peaks” and “Crystal Palace” . There are more than 70 inscriptions written in ink inside the cave . Some of the inscriptions are said to be travelogues and poems derived from the Tang Dynasty. These aged inscriptions tell us that it has been an attraction in Guilin since ancient times. The cave is about 240 meters long and a tour lasts about one hour. Along the U-shaped route, visitors will have ample time see the oddly-shaped rocks and stone pillars. A park is built for the cave with zigzag path, elegant pavilions, ponds, bridges, plants and other garden structures.

The Li River cruise from Guilin to Yangshuo is the centrepiece of any trip to north-eastern Guangxi Province. Gorgeous Karst peaks give you surprises at each bend of the limpid river under the blue sky. Water buffalo patrol the fields, peasants reap rice paddies, school kids and fisherman float by on bamboo rafts. With its breathtaking scenery and taste of a life far removed from the concrete metropolis, the scenery along the river become one of China’s top tourist destinations. The trip starts from the dock south of Liberation Bridge in Guilin down-town area. The river trip is over 83 kilometers long and is estimated to take four to five hours. The eye-feasting landscape and country scenery will never disappoint you. The river generally has three sections. Various attractions like peaks and villages along the river have interesting descriptive names, which calls for much of your imagination to see what it is like.

-“Elephant Trunk Hill” is located on the western bank of Li River. The shape of the hill is just like a huge elephant drinking water from the river with its trunk, thus the mountain was named so.
“Shui Yue Cave” (“Water Moon Cave”) is between the trunk and the legs, which is a semi-round cave penetrated by water. The inverted reflection of the cave in water plus the part above forms a full moon. This phenomenon is unique and many laudatory inscriptions were found on the wall inside the cave. Visitors can boat through the cave to the river. On the top of the hill is a two-storey pagoda built in the Ming Dynasty (1368-1644) surrounded by green trees.

-“Rooster Fighting Hill” is made up of two hills- “Tunnel Hill” and “Tortoise Hill”, lying respectively on both banks of Li River. Opposite Elephant Trunk Hill, Tunnel Hill consists of five coterminous peaks that form the head, wings, tail and back of one rooster. Tortoise Hill looks like a bellicose rooster flapping its wings for a fight. The 138-meter relative elevation between the two hills makes Rooster Fighting Hill more vivid and lifelike. It seems that but for the river to separate them, they would have engaged in mortal combat.

-“Pagoda Hill”, situated at the west bank of Xiaodongjiang River, and Tunnel Hill belonged to one mountain range a million years ago. The movement of the earth’s crust divided them into two hills. Pagoda Hill is also called “Warship Hill” because it looks like a warship going up the river. The local people also refer to it as “Lotus Leaf Hill”. Pagoda Hill got its name because of the hexagonal “Longevity Buddha Pagoda” on it. The seven-storey brick tower was built in the Ming Dynasty. It is a multi-eave pagoda and its plane is trapezoidal. On the north wall of the tower, a statue of Longevity Buddha was encased – hence its name.

-“Seven Stars Park” is the largest comprehensive park with mass scenery in Guilin City. It was named so because of the seven peaks (the four peaks of Putuo Mountain and three of Crescent Mountain) inside resemble the form of the Big Dipper constellation. The park is endowed with elegant mountains, clear water, miraculous stone forest, deep and serene valleys, plentiful animals and plants and valued cultural relics. The main sights contain “Flower Bridge”, “Putuo Mountain”, “Seven Stars Cave”, “Camel Hill”, “Crescent Mountain”, “Guihai Stele Forest” and “Light of China Square”.

Guilin is a well-developed tourist city with convenient transportation facilities. You can enter the city by air, train, long-distance bus or ship and get around the city by bus, taxi or bicycle. 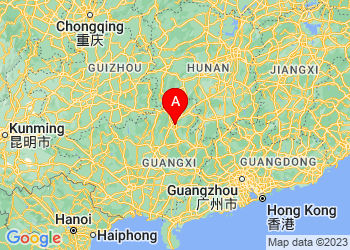