“Vaadhoo” is one of the inhabited islands of Raa Atoll, Maldives – South Asia

This famous group of islands are known for being a heaven on Earth. Vadhoo is one of the smallest resort in Maldives located in south Male atoll facing the Vadhoo channel just few minutes from the airport. “Vadhoo Diving Paradise” is the full name, and its not inaccurate.

If you haven’t seen it yet, the internet has been dropping its jaws open with images of the surreal beach. This phenomena has been called the “Sea of Stars” due to its glowing blue waves. It’s definitely a fantasy-like experience. This phenomenon is caused by a natural chemical reaction known as “bioluminescence”, which occurs when a microorganism in the water is disturbed by oxygen. These microorganisms or marine microbes are called “phytoplankton” and there are a variety of its species that create bioluminescence seen in different parts of the world. The species create the most romantic natural lighting in the world.

One of the most common phytoplankton that cause marine bioluminescence are known as “dinoflagellates”. As dinoflagellates float, movement in the surrounding water sends electrical impulses around a proton-filled compartment inside them. The electrical pulses open the voltage-sensitive proton ion channels into “scintillons” (the flashing unit inside dinoflagellates). Proteins that flow into the scintillon, while the pH in the cytoplasm changes, creates a series of chemical reactions which activate a protein called “luciferase.” Luciferase together with luciferin are combined in scintillons and when oxygen joins them, the neon blue light is created.

Emission of this neon glow doesn’t mean that this organisms are so friendly. Some of them produce toxins harmful to fish, people, and other creatures. The blue light is believed to be some kind of defence for dinoflagellates.

The marine phenomenon can be best seen during moonless nights. Scuba divers can wave their arms or run their fingers on the sand while under the sea to cause a reaction on the glowing planktons.

Vaadhoo is one of the best places to relax, where idyllic nature, this glowing beach and hundreds of best resorts are found. It is a perfect hideaway with sheer tranquility.

There are 32 hotels in Vaadhoo. Click here to check accommodation offers and special prices. 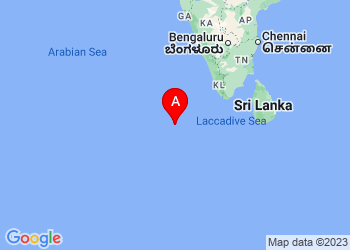