“Patagonia” is a sparsely populated region located at the southern end of South America, shared by Argentina and Chile. The region comprises the southern section of the Andes mountains as well as the deserts, steppes and grasslands east of this southern portion of the Andes. Patagonia has two coasts; a western one towards the Pacific Ocean and an eastern one towards the Atlantic Ocean.

The name Patagonia comes from the word “patagón” used by Magellan in 1520 to describe the native people that his expedition thought to be giants. It is now believed that the people he called the Patagons were “Tehuelches”, who tended to be taller than Europeans of the time.

The Argentine researcher Miguel Doura observed that the name Patagonia possibly derives from the ancient Greek region of modern Turkey called “Paflagonia”, possible home of the patagon personage in the chivalric romances Primaleon printed in 1512, ten years before Magellan arrived in these southern lands. The hypothesis was accepted and published in the “New Review of Spanish Philology” .

We will recommend you top places to visit in Patagonia:

Argentinians call Perito Moreno Glacier the “8th Wonder of the World”. In addition to its enormous beauty, it is the planet’s 3rd largest reserve of fresh water and one of the continent’s last advancing glaciers. It slowly pours, in crackling celestial blue, from the granite spires of the Chilean Paine Mountains into Argentina’s Los Glaciares National Park. The glacier is a kinetic attraction, emitting sonic booms as it calves icebergs the size of skyscrapers into placid Lago Argenito. Every decade or two, it extends its reach just a tad too far, forming graceful ice bridges and tunnels just a bit too thin to hold, and the entire structure collapses into the sea, creating an ice flow of epic proportions. While many visitors are content to stay on solid ground, more adventurous travelers can explore the inlet in small boats, or even don crampons and head out onto the ever-shifting ice field itself.

Parque Nacional Los Glaciares protects Argentina’s wild Patagonian expanses of icy glaciers and mountain lakes. With a massive 47 glaciers, the Andean ice cap is the largest expanse of ice outside Antarctica and Greenland. Created by millennia of ice flows from the Andean snowfields, the ice feeds huge Lake Argentino, Lake Viedma and the Rio Santa Cruz. The national park’s most famous glacier is the Perito Moreno Glacier, safely viewed via lookout platforms and renowned for its dynamic movement and dramatic ice falls. Climbers target Mt Fitz Roy and Cerro Torre, and fly-fishers praise the trout fishing on Lake Argentino. Wildlife spotters might see condor, guanaco and pumas in the park. El Calafate is the national park’s main hub, the base for sailing cruises to spot icebergs on the lakes, hiking expeditions and mountain climbing.

Mount Fitz Roy, the highest mountain in Los Glacieres National Park, rises 3,405 m above the bare, sculpted mountains with blowing snow to a peak that only serious climbers will even consider. Its neighbor, 3,128 m “Cerro Torre” is no easier to crest, but their magnificent spires crown the parkland with its most recognizable formation. Serious climbers can attempt either mountain between November and February, but keep in mind that even in summer, clear days are not guaranteed. Less ambitious hikers will find wonderful trails up into the granite wonderland, nowhere near the apex but high enough to enjoy views across the flowering fields and crystaline lakes.

Nahuel Huapi National Park, which surrounds the lake of the same name, and within which San Carlos de Bariloche is located, is an expansive park of nearly 1.8 million acres, and Argentina’s oldest national park. The park actually contains another park, “Los Arrayanes National Park”.
The larger park covers a large range of altitude, from 700 to 3400 meters, and contains four distinct ecosystems, from high Andean peaks, including the imposing Cerro Tronador, Andean forests, Valdivian rainforests and windblown Patagonian steppe. With four different ecosystems, there is a great variety of different types of vegetation, including several types of Patagonian beech. Small mammals, from the lemur-faced marsupial, foxes and two tiny species of deer are seen near the arrayanes, while slim-necked guanacos (relatives to the llama) graze on the steppe. Five hundred kilometers of trails crisscross the park, which range from the easy 3-hour hike to the “Castaño Overo Valley” to multi-day hikes, from different access points within the park.

In all of Argentina—or perhaps the world—has a stretch of 114 miles ever looked so good. Patagonia is known for holding some of the world’s most breathtaking alpine landscapes, and the section known as “Road of the Seven Lakes” is the most spectacularly scenic of it all. Beginning in Villa de Angostura to the north of Bariloches, the road travels all the way to San Martin de los Andes on the shores of Lake Lacár. In between, visitors are treated to epic vistas that stretch all the way out towards Chile, and pass by shimmering cobalt lakes such as “Correntos”, “Espejo”, and “Falkner”. The name of the road is actually a misnomer since there are far more than seven lakes, although all combine to create pinch-worthy scenery that borders on the surreal. By summer the road is clear of snow and is the most popular time to visit, although unpaved section can occasionally become muddy after exceptionally heavy rains. Though the road only takes about 3.5 hours to drive from end to end, plan on devoting the entire day towards the exceptional alpine beauty. Many of the lakes have short hikes that lead to sweeping overlooks, and the fly fishing in the gurgling streams is Argentina’s best. Or, to truly immerse yourself in Andean beauty, stay at one of the primitive lodges scattered along the route, and find your own little corner of the forest to sit, relax, reflect, and rejoice in how lucky you are to be here.

The Upsala Glacier upstages even Perito Moreno in scale. South America’s largest glacier, Upsala measures 50km long and 10km wide. It’s only from the water of “Lake Argentino” that you can really appreciate the glacier’s magnitude and crystalline beauty. Forests surround the glacier and lake, and icebergs that have tumbled from the glacier’s peaks fill the water. From the glacier, you can hike to the iceberg-dotted waters of “Lago Onelli” and take in vistas of blue-white ice floes, jagged mountains and pristine waterways stretching to the horizon.

Experience the awe-inspiring vistas of Argentine Patagonia on this 4-hour minivan tour from San Martin de los Andes. Keep your camera handy as you drive around the glittering “Lácar Lake”, follow the forested Arraynes Circuit and climb the foothills of Mount Chapelco. Enjoy free time at the Chapelco resort to explore the artisan shops or ride the cable car to the summit for an unforgettable aerial view.

Cerro Tronador is the standout attraction among many day-trip and hiking options in Bariloche. It is named for the thunderous sound the volcano made before it went extinct, but the name (“Thundering Mountain”) is still apt, for the rumbling ice-falls as giant pieces of ice shed from the glacier, which are audible at a safe distance. The main attraction is the “Ventisquero Negro” (also called “El Manso”), which means black glacier, and it’s easy to see why. It is mainly covered in darkish soil and moraine, and small pieces that have broken off float in a milky lake at its foot. The glacier is the source of one of the nearby rivers, called “Río Manso” (“tame river”), which you can also see, and there are waterfalls, including the impressive “Garganta del Diablo” (“Devil’s Throat”), where several waterfalls come together. Cerro Tronador looms over the hamlet of Pampa Linda, you arrive at after driving along U-shaped, pale blue “Mascardi” lake. Visitors can hike up to the glacier at “Refugio Otto Meiling” (where you can also spend the night) and keep going until the road ends at the Garganta del Diablo falls. You can also do this part by bike. In either case, you’ll want to be careful not to get too close to the falls’ edge.

A trip to Laguna de los Tres near Mount Fitzroy in Los Glaciares National Park is in a word, memorable. The lake is accessed only by hiking, which can be split into two days or rolled up in one somewhat more challenging day. Tent camping is available at nearby Campamento Poicenot. For the two-day trip, the campsite is a steep, five-hour roundtrip hike from El Chaltén. Many people make camp here to set out early to Laguna de Los Tres for a glimpse of the early morning sun on the turquoise lake set among the mountains. You’ll want to allot time to spend at the lake enjoying the view. To make the trip in one full day, set out early from El Chaltén for an eight-hour hike. This option skips the early morning views of Mount Fitzroy from the campsite.

Cerro Catedral is a major attraction in the Bariloche area. It’s 20 km southwest of the city, and is a 2388-meter high peak from which you can see the contours of the valley, and the snow-capped volcanoes in the distance, on both the Chilean and Argentine side. There are abundant wildflowers in summer, and you get a view over one of the area’s major winter sports centers as well. Most visitors take the Cablecarril and Silla Lynch, (two different gondolas/lifts) which also have a great view, and stop at the “Confitería” (café) for a coffee or hot chocolate to enjoy the view. From here you can continue hiking along the ridge, to Refugio Frey, for a day hike or to spend the night. The area is very popular with rock climbers, and the mountain takes its names from the rocky spires that look like those of a Gothic Cathedral. Visitors can also hike up the mountain, starting from the ski camp base. It’s a ten-kilometer, relatively easy hike and is usually possible from December to April, weather permitting. 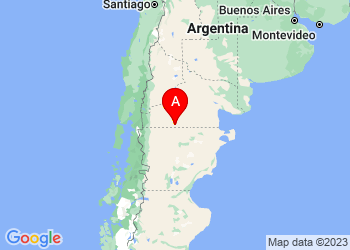